You are here: Home / About Seychelles

The beautiful granitic islands of the Seychelles archipelago cluster around the main island of Mahé. On Mahé you find the international airport and the capital, Victoria. Mahé together with Praslin and La Digue, form the cultural and economic hub of the nation and contain the majority of Seychelles’ tourism facilities as well as its most stunning beaches.

Seychelles can trace its first settlement back to 1770 when the islands were first settled by the French, leading a small party of whites, Indians and Africans. The islands remained in French hands until the defeat of Napoleon at Waterloo, evolving from humble beginnings to attain a population of 3,500 by the time Seychelles was ceded to Britain under the treaty of Paris in 1814.

Under the British, Seychelles achieved a population of approximately 7000 by the year 1825. Important estates were established during this time producing coconut, food crops, cotton and sugar cane.

During this period Seychelles also saw the establishment of Victoria as the capital, the exile of numerous and colourful troublemakers from the Empire, the devastation caused by the famous Avalanche of 1862 and the economic repercussions of the abolition of slavery.

Seychelles’ humid climate is always warm and without extremes. In this tropical paradise the temperature seldom drops below 24°C or rises above 32°C. All but the remotest southern islands lie comfortably outside the cyclone belt making Seychelles’ a year round destination for sun worshippers and beach lovers.

Between the months of October and March the north-west trade winds visit and the sea is generally calm and the weather warm and humid, with average winds of 8-12 knots.

In January and February the islands receive their life-giving rains, rejuvenating the rivers and streams and teasing the vibrant foliage into rainbows of colour.

The months between May and September bring drier, cooler weather, and livelier seas – particularly on south-eastern coasts – and winds of 10-20 knots.

The table below is courtesy of the Seychelles Meteorological Services. 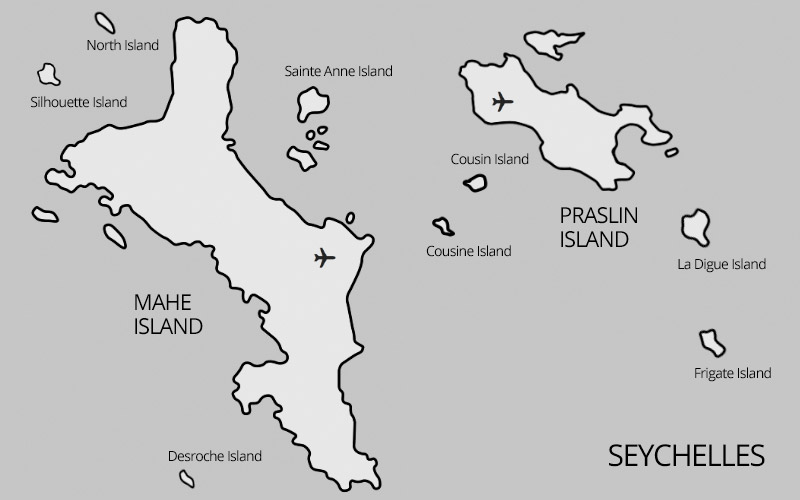 Mahé, is the largest island and cultural and economic hub of the Inner Islands. The island measures 28km long by 8km wide (154.7 sq kilometres), and is the international gateway to Seychelles. It is home to the international airport and the nation’s capital, Victoria.

The island is home to almost 90% of the total population reflecting Seychelles’ diverse ethnicity and descent from African, Indian, Chinese and European populations, and is the seat of government and the chief centre of commerce.

With a backdrop of imposing 1000m granite peaks, Mahé is an extraordinary treasure trove of flora that has evolved over centuries of splendid isolation. Rare endemic plants found nowhere else in the world adorn Mahé’s mist forests in mountain strongholds, such as the Jellyfish Tree, the carnivorous Seychelles Pitcher Plant and the Seychelles Vanilla Orchid.

Mahé is the transportation hub for island-hops and day excursions to neighbouring islands and all other islands within Seychelles. All scheduled domestic flights by Air Seychelles originate from Mahé to the serviced islands.

The popular holiday island of Praslin is Seychelles second largest island, covering an area of 37.56 sq kilometres. It lies 21 miles (34km) north-east of Mahé in the Seychelles archipelago, a popular stop for cruise liners and a vacation destination for honeymooners and beach lovers.

Praslin is the site of the fabulous Vallée de Mai, one of Seychelles’s two UNESCO World Heritage Sites. The island features truly exquisite beaches such as Anse Lazio and Anse Georgette, both sporting coral reefs and crystal clear waters. Both of these popular beaches have appeared on the top-10 list of world’s best beaches in recent years.

Praslin stands at the forefront of Seychelles’ tourism industry with a strong tradition of hospitality and wide range of accommodation facilities. It also provides a base for excursions to neighbouring islands, some of which are important sanctuaries nurturing rare species of endemic flora and fauna.

Close neighbour to Praslin, La Digue is the fourth largest island in Seychelles. La Digue is an island where time stands still and time-honoured traditions such as travelling by ox-cart and bicycle are still king. Traditional methods of boat building and refining of coconut products (copra) are still practised on this beautiful island.

The friendly atmosphere of this intimate island with its languid pace of life, traditional architecture and breathtaking beaches, such as legendary Anse Source d’Argent, is an absolute must for visitors. It boasts numerous and diverse accommodation for visitors, and its picturesque satellite islands nearby are ideal for snorkelling and diving excursions.

La Digue takes its name from one of the vessels in explorer Marion Dufresne’s fleet, sent by the French to explore Seychelles’ granitic islands in 1768.

Apart from hosting the Seychelles’ black paradise flycatcher, one of the rarest birds on earth, La Digue’s biodiversity features such stars as the Chinese Bittern, Cave Swiftlet, Waxbill as well as two rare species of Terrapin. The islands forests also contain a wealth of flora in the form of delicate Orchids, tumbling vines of vanilla, as well as trees such as Indian almond and Takamaka. Gardens blaze with hibiscus and nepenthes against a backdrop of swaying coconut palms.

Telephone Dialling Code: The international access code for Seychelles is +248. The outgoing code is 00 followed by the relevant country code (e.g. 27 for South Africa or 44 for the United Kingdom).

Currency / Money: The Seychelles currency is the Seychelles Rupee (SCR). Visitors to the islands are required by the country’s foreign exchange regulations to pay for all services provided by hotels, guesthouses and self-catering enterprises in major foreign currency notes or by credit card. Rupees can only be used for taxis, in local shops, bars, markets and restaurants outside major hotels. Restaurants in certain hotels will accept international currency as well as Rupees. Money can be exchanged at banks, major hotels and at the airport on Mahé. Travellers are recommended to use their Seychelles Rupees before leaving as changing Rupees back into foreign currency on departure requires the official receipt from the initial transaction. ATMs are available at major banks on Mahé, Praslin and La Digue.

Tipping: Tipping is not obligatory, as bills for most services do a include service charge of between 5 and 10%. However additional tipping is appreciated for exceptional service.

Passports & Visas: Generally no visa is required by any nationals who wish to enter Seychelles as long as the passport is valid form the date of entry until the passengers final destination and passenger is in possession of a return ticket.
A visitor’s permit is issued upon arrival for a period of one month (subject to the validity of return / onward ticket) and can be extended for another 2 months depending on the Immigration in the Seychelles (A total of 3 months altogether).

Health Requirements: The information shown below is general with regard to health requirements. These do change on a regular basis so check with your World Wide Travel West Coast consultant at the time of making a travel enquiry.

Compulsory vaccinations: Yellow Fever (if coming from an Endemic Country or if been in contact with any East-African country and South American countries falling within the Yellow fever belt.
Recommended vaccinations: Hepatitis A & Tetanus

For further information on the Seychelles, please visit the official Seychelles Tourism website.